The Maddi Foundation is changing the path of rare disease. By working on finding a cure for SPG15 it could lead to more understanding of new ways to treat other diseases.

What is SPG15 ?Get Involved


An ITV interview with Maddi in which she explains her journey with SPG15 – Hereditary Spastic Paraplegia 15. 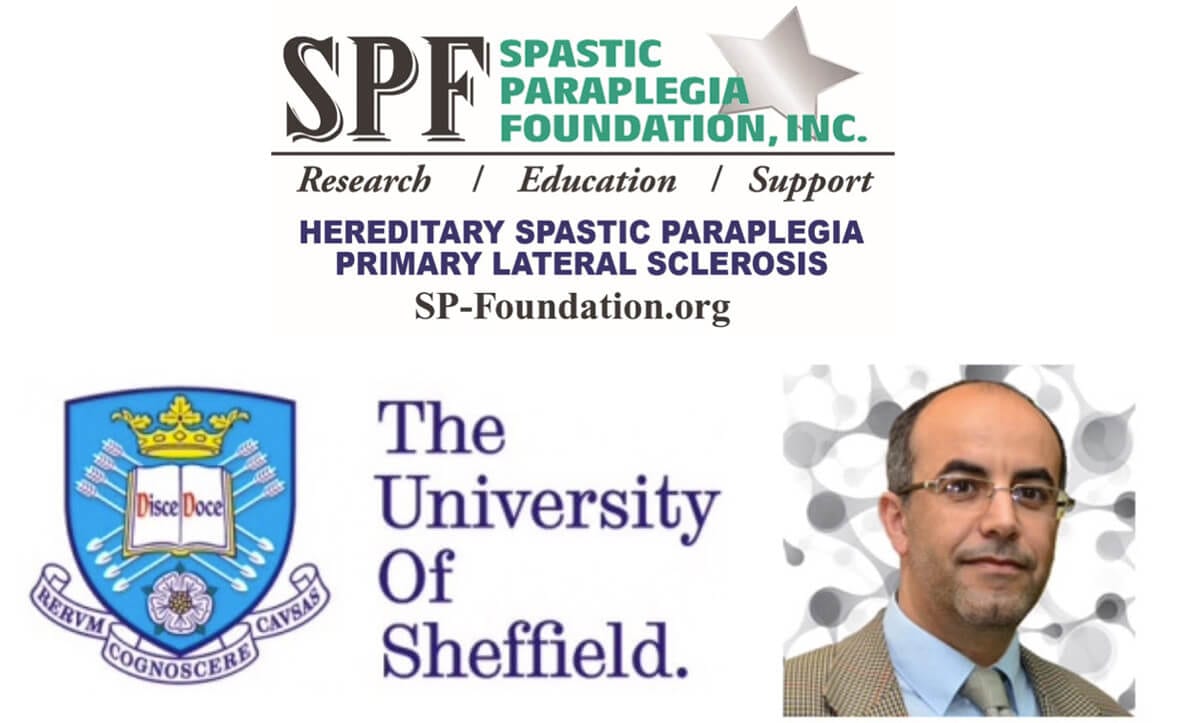 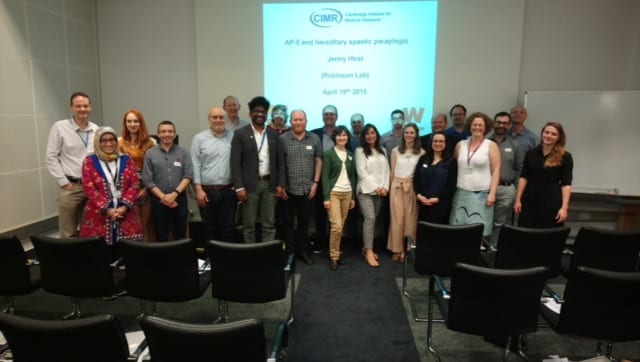 The Maddi Foundation and Dr Jennifer Hirst holding our first international meeting at Cambridge Institute of Medical Research to discuss a plan of action for further research on SPG15 and also SPG11 which is very similar.  We had many of the greatest minds attend who travelled from London, Sheffield, Cambridge, France, Germany and Italy. Thank you to all the Professors, Clinicians and Scientists who joined this very productive meeting. 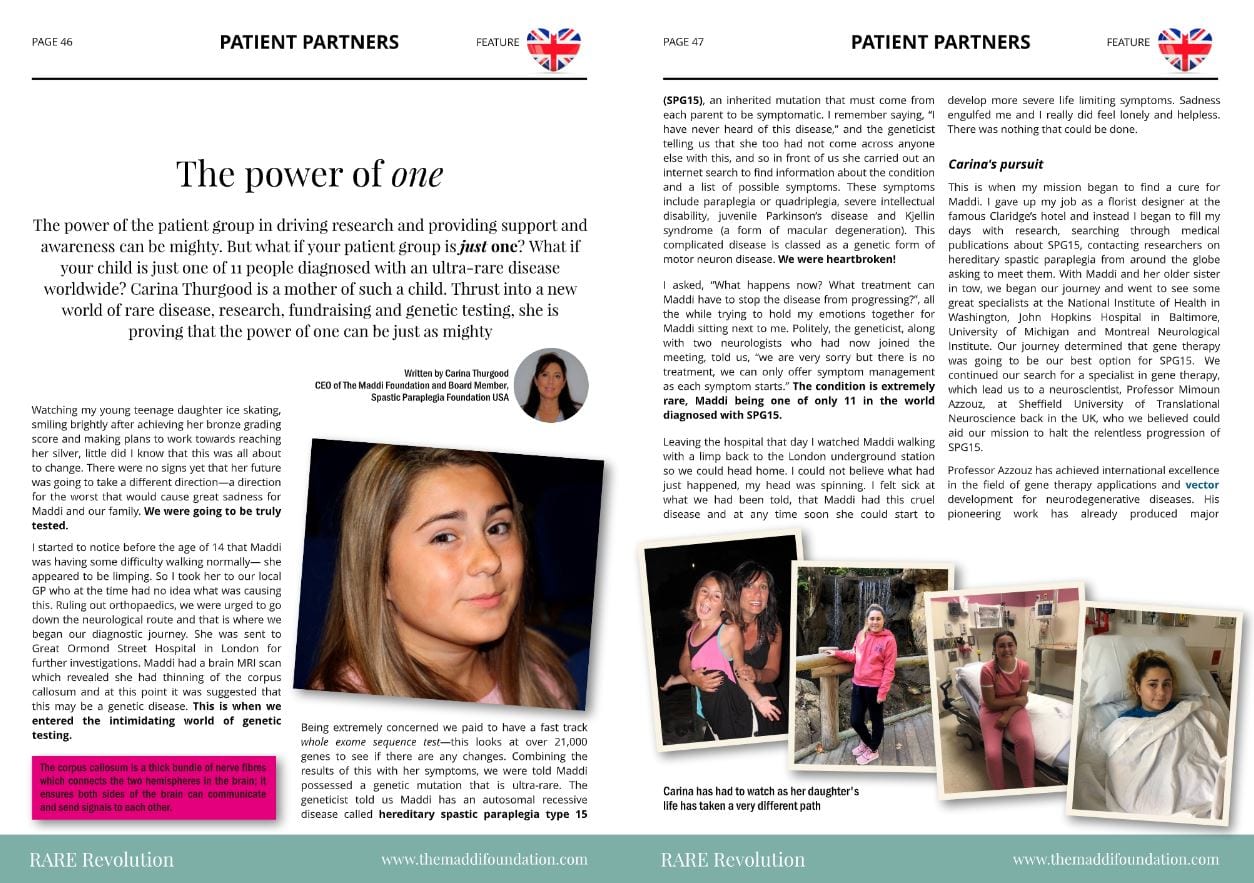 The Maddi Foundation is a non profit charity which was founded by the family of a young teenage girl “Maddi” who in 2016 was diagnosed and started battling SPG15, a degenerative neuro disease, for which to date there is no cure or treatment! The Charity aims to continue to support medical research to help cure this disease and other similar rare diseases. Conditions this rare receive very little attention and funding.

This is where you come in

A 100% of your donations and contributions go directly towards funding the science necessary to advance towards clinical trials.
Find out more

What is Spastic Paraplegia Gene 15?

SPG15 is classified as a type of motor neuron disease and is a very rare neurodegenerative illness. Onset generally occurs in childhood or adolescence where the first symptom often starts as leg stiffness. It is knowing to cause paralysis in the lower and upper limbs with neurological impairment causing abnormalities in the brain. In addition, it affects the peripheral nervous system impairing vision and hearing it can also bring on early juvenile parkinsonism. The disease is progressive and has devastating effects of Motor Neuron Disease.
More info on SPG15 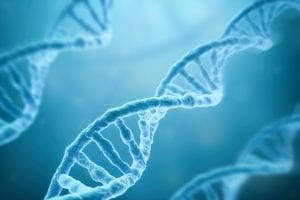 Complex hereditary spastic paraplegias, such as spastic paraplegia type 15 (SPG15) is a very rare neurodegenerative disease which onset typically starts in childhood or adolescence. It is knowing to cause paralysis in the lower and upper limbs with neurological impairment, which may include dysarthria, dysphagia and extrapyramidal signs like dystonia (continuous spasms and muscle contractions), akathisia (motor restlessness), parkinsonism (characteristic symptoms such as rigidity), bradykinesia (slowness of movement), tremor, and tardive dyskinesia (irregular, jerky movements).   Onset of symptoms in SPG15 typically occurs in childhood or adolescence and the first symptom is often either leg stiffness or intellectual disability. Neurological symptoms may include learning difficulties and intellectual disability, structural brain malformations (e.g., thinning of the tissue that connects the left and right halves of the brain, the corpus callosum), loss of nerve cells in different parts of the brain, involuntary movements, and dementia. These issues may be progressive. Additional symptoms may include numbness, tingling or pain in the arms and legs, problems with muscle movements and reflexes, and issues with bladder control. Some individuals with SPG15 also have problems with the retina in the eye, which can cause visual impairment. The severity of each of these symptoms is variable in affected individuals. SPG15 is caused by mutations in the ZFYVE26 gene. It is a progressive autosomal recessive disease, which means that both parents have passed on a mutation to defect the gene. ZFYVE26 encodes the FYVE domain-containing protein ZFYVE26/SPASTIZIN, which is associated with the adaptor protein 5 (AP5) complex.

WE NEED YOUR HELP NOW

Every penny counts. Your generosity will fund vital research and treatment efforts in the hope of not only stopping progression of SPG15 but also finding a cure. This will open the doors hopefully to help other similar orphan diseases. Donate to be part of a cure.
Donate now
This website uses cookies to improve your experience on our website.
Read our privacy policy and cookie information here.